A NEW DAY HAS DAWNED HAS IT NOT? 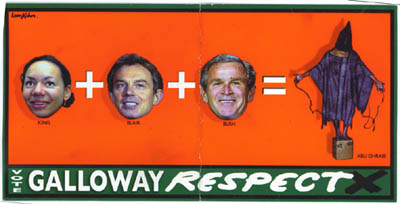 Bloody hell. They elected Galloway. And this was how they did it.

You got to hand it to the SWP though. These guys have craved power for such a long time. Lets see what they do with it in Bethnal Green. If they can do anything to stop war I am up for it. Quite a result for such a new coalition.

It was certainly a live election on the streets of Bethnal Green last night with pubs full of switched on white people who either hadn't voted or voted lib-dem.

In the end the war definately did play an interesting part in the election and that is something to be pleased about.

Police were stationed outside each poling station. Pissed, cycling down brick lane with no lights the wrong way last night I asked two van loads of them to give me their assesment of the local Muslim threat.

Forgot to ask the small group of bengalis wearing blue rosettes how the fuck they had managed to become tories.

Oh and mixmaster morris told me he'd voted Lib-Dem for the first time in his life.

George Galloway gave a speech like a tin pot dictator on TV about 4 am. I think he was declaring war on the local council and telling those who had run the election that they should hang their heads in shame.

Ooooona looked like she needed consoling. If she hadn't voted for the war she would probably have kept at least a thousand votes, her seat and possibly her conscience. I think the result can be read thus:

Her constituents believe she failed to represent their interests on an issue which mattered to them. I fucking hate Galloway but thats fair really isn't it.
Posted by DAVE BONES at Friday, May 06, 2005