So some they told me about, most they removed without telling me. Lots of my filming from Finsbury Park is now gone from Youtube. This latest one from a protest outside the US Embassy was a speech from Martin Mubanga who was released with no charge from Guantanamo bay. He was talking about the desecration of the Koran by guards there. Youtube are saying the video violates their "Violent Criminal Organistaions" policy. Unless they are referencing the guards Martin is complaining about here it is pretty much blatant that they are lying as the last I heard the Government settled out of court when Mubanga sued them for illegaly deporting him from a third country. 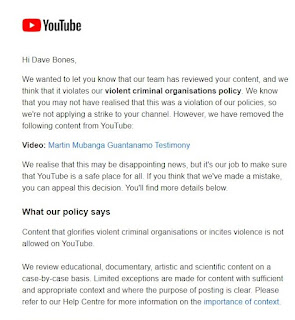