I wish I had filmed all this. Mr. Abdullah basically said that no-one who kills children can call themselves Muslims, and neither can anyone who claims to stand for Muslims in this country and justifies the killings in Belsan. A Muslim is someone who prays five times a day and does good to those around him and never, never, never does he kill innocent children. He also spoke of 50,000 children murdered by Putins soldiers in Chechenya.

He called for a dialogue between Muslims and non Muslims wherever they would be happy to meet to stop further atrocities on either side and defeat those who would carry them out. He said that since his beloved sheik Mr. Hamza has been in Belmarsh four people have become Muslims as a result of talking to him and that they have all been removed from his presence. He wouldn't tell me how he had come across this information but swore it was true. He asked the media to tell people that the Muslims here want to talk on neutral ground with whoever is up for it.

Even the Police I was standing with seemed surprised by all this and Mr. Abdullah only said the word sodomite once during the whole hudba. He said he wasn't a terrorist and only fought with his tongue. Strong stuff eh?
Posted by DAVE BONES at Friday, September 10, 2004 No comments:

Finally had a look at the new UBA site and its very interesting. In one of the forum threads there are lots of UBA guys who are not suprisingly sounding off about recent events in Belsan. They are being answered by Muslims Stephen has encouraged onto the site who say they are sad about what happened. The "Proud to be British" guys then come back and tell the Muslims to piss off as they don't go far enough in their condemnation and ask them to condemn Omar Bakri's recent comments. Stephen moderates all this quite sensibly, encouraging the Muslims to stay on board. He seems to be a tad weary of running the site and nervous of Police attention.

At Hajj's place last night I asked him what he thought about Bakri's comments about hijacking schools. He said that if he saw Omar Bakri again he would slap him across his face for what he said. I think the UBA guys would be suprised that Hamza's friends have no time for Bakri or Al-Mujaaharoun. Some of the guys here believe Bakri secretly works for the government. One of Hajj's Muslim brothers also told me that he believed Russian soldiers had killed 45,000 Chechen children between the age of 9 and 16 in the last 10 years and reduced the population from 2 million to 800,000. I doubt if the Russian people are hearing that on the news and neither are we.

I asked Hajj if he would meet one of the guys from the UBA for a chat if I could arrange it for my film. He said he would talk to anyone, even racists.

" Arrange it. We meet in equal number or just one on one, in a cafe with nice food and talk about anything they want to talk about. We need communication."

Abdullah advised him against being on film. I feel now that I wouldn't want to make it without him. Hajj is a fucking diamond.
Posted by DAVE BONES at Wednesday, September 08, 2004 3 comments: 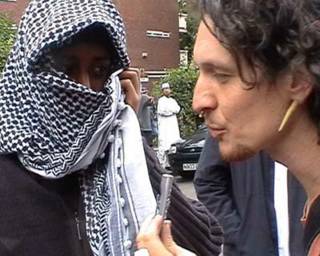 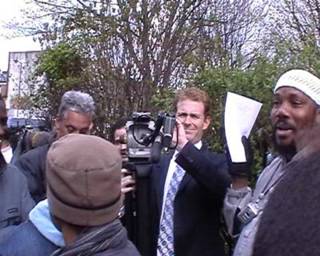 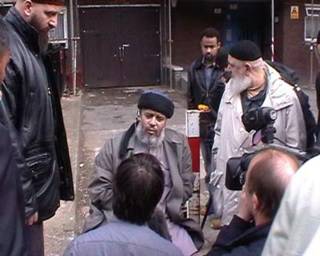 Hajj and Abdullah as Hamza does C4 interview. (unbroadcast)
Posted by DAVE BONES at Monday, September 06, 2004 No comments:

I visited Hajj and Abdullah again on Wednesday. Abdullah took us all out for fish and chips in his people carrier. Again I kick myself that I didn't do this with Mr. Hamza around. We talked for a long time about what we believed. It's much harder without a camera as I have to justify my own beliefs rather than just soaking up someone else's. When we got back to Hajj's place Mr. Abdullah tried hard to make me understand his views about God and about homosexuality. I told them a lot about my life too.

It was great being so honest with no one taking offence. Hajj told me that when his neighbours had seen him on TV next to Hamza they were worried. As he had been living there for such a long time he had been able to convince them neither he nor Hamza were terrorists. I'd like to speak to them for my doc.I spoke to Hajj before about Mrs. Ujaama. Apparently she is in this country and I wondered if she would have anything to say. They believe that Mr. Ujaama has sold Hamza to the Americans because he wants to see his 3 year old child again. A fucking sad story I would be very unlikely to get from his wife.

Abdullah has a lot of respect for Mr. Bin Laden, he doesn't believe he was resposible for september 11th, he thinks all the Jewish people working in the world trade centre took the day off and Mossad did it. I think all this is contraversial enough in itself to get on TV. Balanced with some views of people who hate Hamza and I've got a seriously emotive documentary I would be proud to present. He was still understandably touchy about TV and told me that Patrick (from Idealworld now IWC Media) had tried to arrange a meeting with him without me, ie. he was trying to cut me out of my own doc.

I haven't spoken to Patrick for a while as I don't want to waste his time without something more solid. I don't want to believe he would fuck me over, I hope it was just a misunderstanding. I can't imagine Patrick posting on www.shootingpeople.org which has 40,000 members with an official call for new directors, only to cut them out of their own projects. I told Mr. Abdullah that he had two choices. We could go the independent route, where I would make a film which may get a small scale cinema release which would be viewed by a small number of people who were curious or sympathetic, or we could go the TV route, where he would risk being re-edited to look bad, but he would also get a huge audience of curious Muslims and the sun newspaper's fans who fucking hate Abu Hamza. I told him that I would like people who hate Abu Hamza to watch it, and fully intended to include their views in it. I want to interview people from the sun as well. I would also get a budget which would cover getting news footage to contrast with my own etc.

On Friday Mr. Abdullah was preaching, as he has done a couple of times against people with Mohican's, coloured hair and rings through their ears and noses.

" That's you that is!" said an attentive policeman I was standing next to. 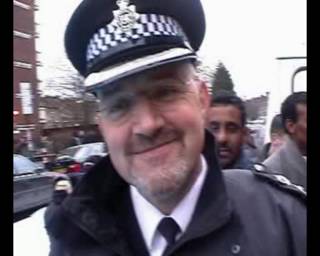 Barry the Boss (see BARRY THE BOSS)
Posted by DAVE BONES at Friday, September 03, 2004 No comments: