cross posted from my Chops blog


I have been waking up at five each morning in a panic for the last few days wondering what this would be like. Everyone has been taking the piss out of my trailer hiring ideas so I bit the bullet and grabbed my leathers. We got to Gravesend about lunchtime and once we settled up the guy (Phil) delivered us back onto the A2 on his Harley. My pal Alexa followed in the car.

All my fears of bumps more or less came to nothing. With the springs under the seat I wouldn't notice it was a hard tail- yet. Don't want to speak too soon but yes, for something so low its ridable. It seems to be true that taking all the weight off the back end and the sixteen inch wheels actually make it chuckable, but I'm not going to the one to chuck it!

The style of handlebars and the sideways movement in the seat springs makes it feel a queasy bit snakey when I let go the throttle but it powers through corners great. The small front wheel gives it a bit of a helpful tip, which I hate in sports-bikes but is quite useful when sitting at wheel level.

I turned up at Blue Chalet MOTs opposite Brands Hatch and it sailed straight thru. Really nice people there with some really beautiful old Harleys. A guy there, and a few people since have guessed that the engine as a lot bigger than it is. I think its cos of the small wheels, and the overall scale of the bike making the engine look bigger. Its certainly a lot smaller than it looks in the photographs.

Tax is coming Monday. I got up to about sixty five on the way back to London which is plenty and plenty noisy. It felt fine around town though I'd like a better mirror and will look into some small indicators. I didn't grin when I rode it but once I got safely home, I haven't stopped grinning since. Its leaking a bit of oil and I need to sort the clutch a bit but I am a happy bunny.

Before I picked the bike up I grabbed a lock at a really nice shop in the Kings Road called Gorgeous Bikes. You would think being on the kings Road it would be expensive and snooty but it was neither, the guy who runs it is a real enthusiast about everything he sells. I picked up a cover there as well but its way too big. Hopefully I can change it. I have covered the bike temporarily with ripped ton bags to protect it from the South London haters, should be OK. I'll find out eh. 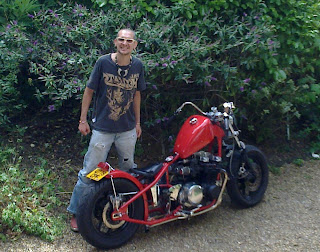 UPDATE: My first ride outs in London reminded me how much I hate riding in London. Everyone overtaking me on the inside, moody van drivers plus I think I tripped a couple of cameras in those sneaky 20 zones. Riding at dusk I found that the speedo doesn't light up and I ran out of petrol after only 40 miles, luckily I had reached my destination in Highgate where this picture was taken. Riding back this morning I think the bike was overheating. Hard to tell as I have never sat so close to a bike engine before. The riding position is actually really good for London though. I hope I still have my licence by the weekend.

Very nice blogg you have here