YOU ARE BARKING MATE

Beauty maybe somewhere in the eye of the beholder but there are so many fuck ugly attempts at "chopper" on ebay at the moment I am tempted to post a "rogues gallery" blog. Instead here is a Z650 hardtail I am not going to bid on. Really nice lines but its a bit.. how should I put it?

Still I have a feeling that if I saw this up close in real life it could tempt me as there is a lot to like here. Footrests and handlebars in a normal rideable position for UK roads, forks at a sensible angle and nice low horizontal frame rails (is there a word for them in chopperspeak? fuck knows)... Good job it is in Kent and not quite just round the corner. 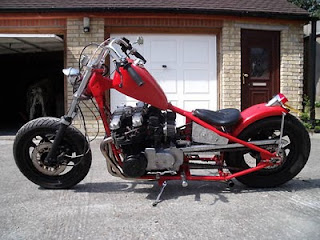 Well it turns out it is actually me who is barking after all cos I bought it. Bizzare. It wasn't really a decision so much as a realization. I was just staring at it for a coupla days and it dawned on me that I was going to try and buy it. Turned out the auction was half way through the Engerland game which was a relief. My neighbour in whose house I was watching it (an ex motorcycle instructor with a CBR1000 decomposing in the carpark) said

"Watching England is like having six inch nails hammered into your head in slow motion."

We lost and I won! Scoring in the first ten minutes of the second half I was running round with my shirt over my head, doing Roger Miller dances, the lot. Fuck Engerland. No, I will qualify that- commiserations to the guys who made it to the pitch and their support staff, fuck everyone else.

No indicators, no back suspension, no front mudguard- What the hell have I done?

I haven't picked it up yet and it needs Tax and MOT. I am shitting myself. I don't think I am going to ride it very much. I just wanted to own one. I have wanted to own one since I was a spotty eleven year old Motörhead fan. I have been sporadically blogging about them for a year, clicking through ebay in an OCD haze. I suppose I must have thought it was a bit dirty wanking over other peoples motorbikes, so now I can wank over one of my own.

The guy who is selling it has had it for ten years. He loves it, but as in the case of a lot of Jap choppers on ebay I am sure- he has traded up for a Harley. Is that what will happen to me in ten years? I fucking hate Harleys!

One good thing about buying something like this on ebay is that when I see it I can say Wow! as the price has already been agreed by auction. Not every chop has the gift of looking shit hot from every angle- check this out. 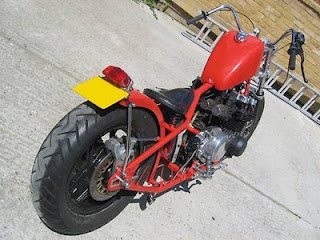 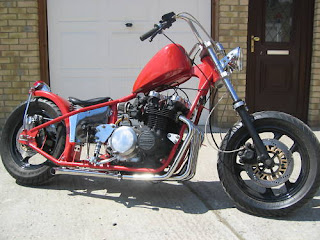 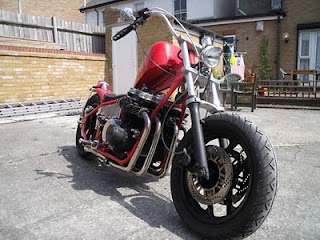 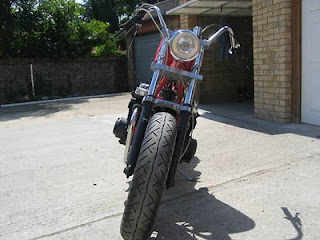 Have I missed any out? I am looking forward to Saturday. This song is for me!
Posted by DAVE BONES at Thursday, July 01, 2010

Faith No More's rockingest tune ever...

Hopefully Naomi will be able to deep-tissue massage your back muscles and spine back into relative health after every time you take the goddam thing out for a spin... Look out for speed bumps and potholes... look out for little pebbles or 2p coins lying in the road, for that matter...

Oh and it doesn't seem to have mirrors either...

I thought I saw one in some of the photographs..

No mirrors?? No back suspension?? You gonna need more than a massage, you gonna need a bit of physical realignment or a coffin if you're not careful, bro. She's a beaut, tho.

It's about farking time.