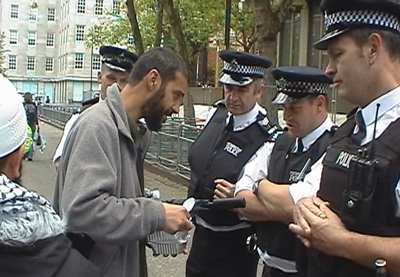 Very few police about standing well back. Here is one of the Muslims offering a group some rice and chicken.

One Policeman negotiated the whole protest with 2 or 3 community leaders. Religious protests are like no other. They brought hot food, which they shared with everyone. I ate mine talking to Martin Mubanga when most people had left. I told him I was a fan of his rapping. I knew that a lot of Muslims I had met in Finsbury park thought music to be haram and asked him about this. He said that he thought it was OK.

I saw a lot of people who are very used to me being around with a camera including the guy holding the burning cross. My feeling is that the supporters of shareeah, having been ousted from Finsbury park mosque have burried their differences somewhat with Mr. Bakri and the bethnal "anti-democracy" posse.

The feeling I get is that I am around a group of 18-40 year olds, mainly. They have grown up in London, mostly. They are very much like "street" londoners except that they dont drink. Except for spouses, men and women seem to live completely separate lives. I think a lot of them train together to defend themselves. I think they believe that the media is a vast conspiracy run by evil people who work for the devil.

Militant islam or armchair jihadis? That I cannot tell.

Evil people? I'm sorry, I'm completely underwhelmed... as I've said before, if this is the war on terror I want my money back. Ask the Police if they came across as evil.
Posted by DAVE BONES at Sunday, May 22, 2005