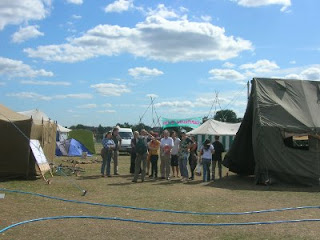 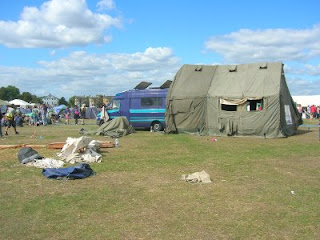 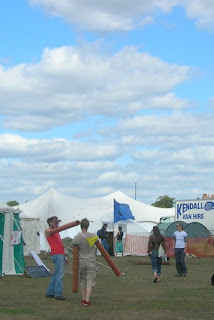 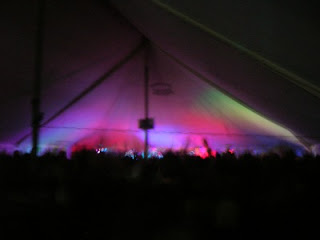 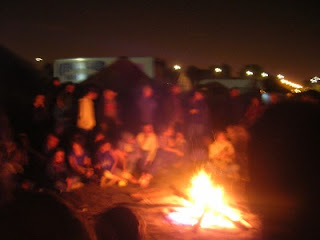 I think I actually got the hang of Climate camp a bit better yesterday.

I turned up quite early with no plan of action and drifted into a talk called "Composting the Capitalist State". Maybe it was a bit early for me but this came across as the same confused dreaming of a better future I have been hearing from people at these things for years. Although it sounds like it this isn't really a critisism. I am confused too. I think it is hard to visualise a better society or concrete steps how to achieve one, and Climate camp is going to attract such dreamers. Anyway, A World to Win came across as really lovely people. They say they have a plan, look at their website and judge for yourself.

After watching a "Mass action game" where groups of people were learning to lock themselves together, jump fences and build "body blockages" of all descriptions I stumbled on to find myself at an "Action Speed dating" event.

Last time I was actively invovled in mass action? Reclaim the Streets sixteen years ago. How old are you? Some of these teenagers were imagining some mythologised Reclaim the Streets I tried to dispel a bit. Yes. Everyone blocked a main road took drugs and had a huge party because they could. Trafalgar Square, the M40, yes. It looked amazing but what was it about? What did it achieve or point to? We can take over a street, take drugs and have a huge party. Great.

I am going to do what? Tomorrow? Where? Its Sunday. Noone will even be at those offices. Yeah. I have some contacts in the media. They won't come. Try any day other than Sunday. They can't do it. Its got to be Sunday. Got to go back up North, can't really get arrested, got to go to work on Monday. Discussions about the artistry of building oil slicks with bin liners gaffa taped to the pavement.

"But aren't bin liners a product of the oil industry?"

If I am going to glue my bell end to something its going to take more than ten minutes planning with a group of random strangers. Unless they give me some K or something then, possibly. Coming round with a policeman in rubber gloves pouring thinners on my dick might just be the thing to put me off K for good. I have no idea yet if this conspiracy hatched anything but it made me miss dinner and a couple of us dropped down the hill into Lewisham to my favourite Italian deli for a sandwich and a beer.

In the afternoon I attended a debate I was looking forward to all day with at least a hundred others, which considering it was unamplified went really well. Called "Green Authoritarianism" I was hoping that we were all going to see who would make the best "Green Hitler" from our ranks and having been elected once, forever bow to their every despotic whim and propel them to national and global domination. It wasn't quite like that, but I thought The Anarchist Federation presented really well. The debate which followed left me with a realistic picture of the state of the collective climate camp mind as people argued using the state to make change (taxation) vs rejecting the state.

As well as people driving past the fence shouting, (I saw "I HAVE got a job" sprayed on a tent at the perimiter) I like to think there are just as many people going about their daily lives who wish the Climate Camp well, and hope that someone one day might come out with a sound idea for large scale change. Meanwhile Climate camp goes on, full of people plotting to lock themselves to shit, invade offices, glue their bell ends to the gates of Downing street etc, joyously recruiting others to do the same ever hopeful to raise awareness and to challenge the extremes of Capitalism.The press attention so far collected and proudly displayed on a straw bale near the entrance is I think unanimously positive.

Over the day I overheard many many people heatedly debating the Police change of tactics this year. Has Ian Tomlinsons death and the subsequent media backlash changed things? Is this just a fake charm offensive? I joined in a couple of these debates, but overall I don't think it really matters. These are all the people who feel they have to push. The Police will inevitably get in the way sometimes. They will find they are up against people wholeheartedly commited to what they are doing which must be a difficult thing to deal with and meanwhile the energy crisis will loom ever nearer.

I think realistically the venue change has a lot to do with it. People coming in their thousands from all over the country to try and shut down a power station is a really big deal which could potentially disrupt the lives of thousands. If people are doing this in a non violent manner what can "The State" do? Harrass them. Try to encourage them not to come back. Shutting down one of the main roads through the city with tents for a day will "raise awareness" and attract attention but it is not difficult to see the thinking of "The State". Do you leave these people overnight? Another day? Two nights? If they are not being violent but wont leave either how do you get rid of them?

Black Heath was really well chosen as a place to regroup, recruit and evangelise. To feed, water and provide toilets for so many people in London without permission and pack down to leave no trace is just a hell of an achievement. The entertainment in the evening was top class. The largest tent must have held six hundred or more gyrating people from all over the country dancing to live ska and great Balkan djs whilst outside people were singing round a fire all night.