Oh yeah. Mr fastfingers always moans that I never blog about the band so here goes.

I was fucking ill all night at the street party we had here last weekend. I was lying down unable to sleep then I would hear a band I liked and wander outside for a bit until I felt faint. I kept bumping into people I hadn't seen for ages and shouted "I'm ill!" at them which I got totally sick off.

8.30 am we threw everything in a van and went round the corner to play Acid Monkey. I was cursing being booked at this time but it really worked out as people were totally fucked and up for a bit of experimentation. As soon as I was there I felt fine and the gig went great. The building wasn't exactly empty, but I think the Police were aware this was a professional party crew and I saw one officer being escorted round in the morning to make sure nothing went missing. Very nice to see sensible Policing at a squat party. It must have looked like a Doctor Who set at night on acid with all the water bottles everywhere. 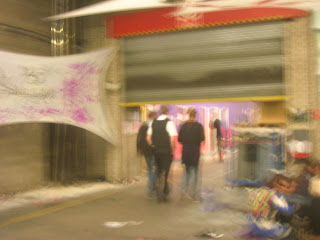 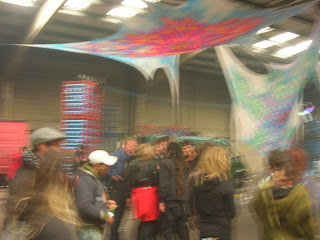 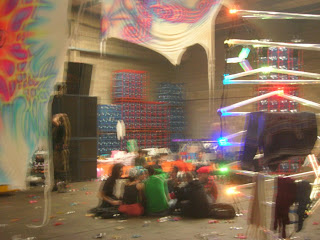 I was still unable to sleep when I got home about 12 so I wandered up to The London Tattoo Convention and drunk a lot of alcohol. The tattoo convention was strangely dissapointing. I don't know what I was expecting but if this is the premier tattoo convention in the world maybe I am missing something. There were some nice people there though and judging by the queues at the cash point I think the tattooists made a lot of money. Anyway I woke up the next morning and I didn't feel any worse so I know what to do next time I have the flu. 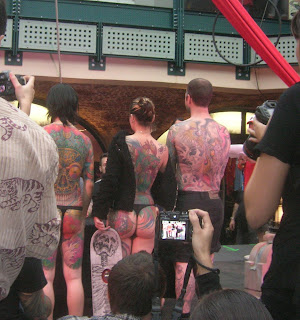 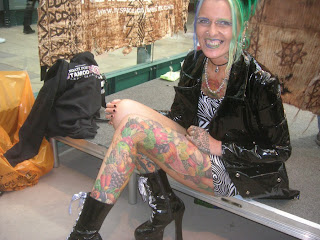 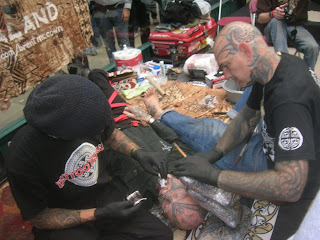 In hopes of some enhancement to our stage presence one of the dancers pulled out a smoke machine from her attic yesterday. I contacted the first website I came across in hopes of getting it working and they have been very helpful. 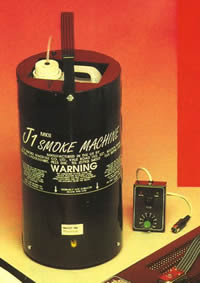 Turns out these haven't been made for sixteen years, but they were shit hot in their day. I was a bit stumped as the switch is missing, but having been on the party scene in London for years I called the first person who came to mind and wonder of all wonders they knew exactly which machine I was talking about and had a switch for it so hopefully when I come back from Vipassna we will be smoking!