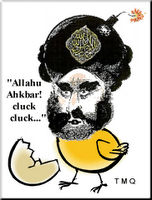 I wrote the original blog (GOOD FUCKIN QUESTION) based on communication I had with someone from the blog and had a mystery person set up the "Dave Bonewanker" hate site.

I found out from our last communication that this was (probably) the person who I had the communication with. As "Dave Bonewanker" was obviously not boasting about the number of hits he had...

Anyway, just clicked on them and Google have taken them down as a "hate site".

After posting our article at blogger.com on Jan. 27, 2007 Islamofascist Arab and Muslim Groups Protest ABC’s Hiring of Glenn Beck , the Arab American Institute visited our blog at least 4 times, then contacted Google to have our site blocked as a hate site.

Without warning, Google obliged them, even though we are clearly not a hate site. We simply blog about radical Muslims and Arab groups, like AAI. We also joke and attempt humor, somethingArabs and Muslims seem not to understand.

Somehow these Arab/Muslim Islamofascist groups fail to realize that their dream of an Islamic sharia state in the U.S. has not quite been achieved (Google does seem to have thrown in to aid them at this point). We are still free to report on their activities as we wish.

If Google folds under this pressure and boots us from blogger, we’ll go ahead immediately with our plan to host our blog on another paid domain with our same name, THE MUSLIM QUESTION, free from the conniving reach of enemy Islamofascists who would silence our truth about them.

Within 2 months, our blog was in the top 1-2 percent on the web. We can do that again immediately. This time we will focus more attention on Islamofascist groups like the AAI. In fact, we will concentrate on them. Thanks for the motivation AAI!

We will not be silenced by enemies of the United States of America. We will expose them and run them off to jail or out of the country or both. They don’t know who we are, but we know who THEY are.

At the moment, I am only able to edit and create posts at blogger. I cannot access our main blog. I get a round robin from the blocked page to a sign in and back around through the page editor to the blocked page again.

Google claims they don’t censor, but that’s exactly what they do. They let people and organizations who oppose the truth gang up and have you blocked, especially if Google also opposes your views. Google is only too happy to oblige because they’re as liberal an organization as exists in the United States. In fact, they side with and attempt to appease these Islamofascists, but pedophiles are welcome at blogger anytime.

We’re at war with terrorists and Google wants to throw them a party. I didn’t even make the guest list and I’m an honorably discharged 100% disabled veteran.

I was just thinking about following up my previous posts by saying that I did indeed believe they were acting as cheerleaders for possible future genocide- but in no way do I think they should be censored. There is no point in censoring this type of thing.
Posted by DAVE BONES at Thursday, February 01, 2007

dave bones said...
This comment has been removed by a blog administrator.
6:56 am

dave bones said...
This comment has been removed by a blog administrator.
6:57 am

dave bones said...
This comment has been removed by a blog administrator.
7:21 am

See what I mean? Why censor someone like this?

The more sites I have up,the more dick I can get shoved up my over-worked arsehole.

Quite the profile, too.

Its not suprising that someone who writes such an obsessive "Muslim Hate site" is secretly fantasising about homosexual relationships with Muslims.

All I originally did was ask him

"Don't you think most Muslims just want to get along like the rest of us?"

and I get all this.

the comments which have been deleted here by "Dave Bonewanker" said

If you are going to comment on something, at least tell the truth you sissy.

P.S.Muhammad was a rapist, faggot,pedophile, child molester, fraud, and pussy. And there is no Allah.Just stupid Islamic turds in a hate cult.

hes gay but he doesn't realise it yet.

But he doesn't spell or write well enough to put that new Malung-TV-News blog together.

We are so doomed.