This is part one, part two will include loads more about The Bridge to China raid, also Musa speaks candidly about life in Belmarsh with the Crevice guys, Dhiren Barot etc...


Yeah anyway. No one believes me so I told Rachel and she told everyone with the Sunday Times on their coffee table today! Thanks to The Sunday Times for doing this. It feels really good. We did it! It wasn't difficult. Musa rocked up 4th October last year with all this and we started filming straight away with Mike, Claudio Franco (a real journalist) and Katya Nisim who made this. There was no issue of trust, as his brother in his darkest hours had been talking about me saying

“Dave Bones knows I'm not a terrorist. He's got loads of footage.” etc.

Pre- trial our conversation focused a lot more on serious tensions between Atilla and Hamid, jointly charged as leaders of the group that is probably not surprising. Now the trial is over I am glad we didn't use this story. Musa is a very credible person. He appears in Preachers of Hate but that was one of the only times I saw him in Finsbury Park and I had no idea he was Atilla's brother as I didn't speak to him.

He's not what I would call a “Jihadi” and he wasn't involved like his brother was. As I say, no one believes me and I had a deep yearning for something a bit closer to "The Real Atilla" to come out so I introduced him to Rachel and we filmed the above. The Ahmet family hate journalists, but Rachel, with what has happened to her is a person Muslims who aren't in favour of terrorism are going to want to explain themselves to isn't she?

There is loads more to come soon. Atilla, in his situation is very lucky to have a brother like Musa. He said to Rachel that when he told his bro he had been talking to a journalist Atilla had a right go at him. He called him later saying what a nice woman he had seen on Newsnight.

I know Atilla is bigger, but Musa should still punch him when he gets out. I remember blogging that I hoped something positive would come from this. Unaware what was going to come out in Atilla's trial I had been nervously "suspending belief" about what Atilla had either said or done, as well as preparing myself for the improbable notion of standing in front of a load of professional wigs and a jury of my peers saying

"Well I thought he was alright you know? A bit nuts undoubtedly, but he's from Cyprus isn't he? They are all like that over there aren't they. I mean you should meet my mate.. etc. etc. "

I realised what Musa had to say about the Crevice guys was very news worthy, and properly surreal “Malung TV News”. I've had journalist friends with my interests at heart bollocking me for not doing this story myself. I just got sick of shouting in the relative darkness and I was also worried that a "shoot the messenger" situation might occur if I popped up with all this in a newspaper. For someone who didn't want to accept Atilla's reformation it wouldn't take too much of a dig around this blog to find plenty of target practice to subtract credibility from something by me- but you can't argue with Rachel can you? Unless you are a conspiracy theorist apparently.

I've got so much footage of Atilla in action in Finsbury park I haven't put up. I don't dare in case the Sun come pilfering again. 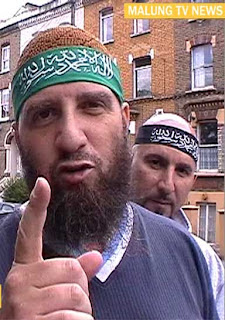 Finally- if THE FOOTBALL ASSOCIATION want to give Atilla a start coaching when he gets out- EIGHT SEASONS UNBEATEN with a schoolboy team. Do you know ANYONE with a record like that? I mean seriously, why are we getting fucking foreigners in to run things when we have home grown talent like this? Shameful that's what it is. Its a fucking disgrace.

I'll dig out the letter I wrote to the judge at some point but I remember the last sentence was "I hope the court will take Atilla's rehabilitation very seriously".

If anyone wants to write to Atilla do get in contact. His wife told me he doesn't get letters. I know Atilla as a man who has huge emotional energy which he is desperate to put to good use and along with sorting things for Muslims in a responsible manner, I couldn't think of anything better for him than terrorising over paid football stars for our national benefit.

Interesting stuff. But it seems to me that no one is addressing the problem. The problem is the Koran. There are so many references in there suggesting the supremecy of Muslims and confrontation with non-Muslims. If the Koran were published today there would be outcry against it.

What we need are rational influential Muslims to state that the Koran was a book for it's time and many aspects do not pertain today. But alas, if one were to do that it would effectively invite their own death. How very, very sad. Nevertheless, we need a hero, or heroine. Who will step up?

Do you think that if the Punjab was bombed like Iraq the Sikhs more war like literature would come alive to them?