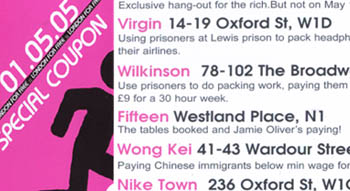 Mayday is on again this year. As Republicans often point out, many soldiers have died for my right to protest so I had better take it seriously.

I sometimes circulate among these people. Our lot used to run an excellent squatted cafe in Kentish Town. They had an anti-copyright cinema, where they used to show cracked div-x's of movies they downloaded from the internet for free. I found them to be by and large, highly principled people. They had great press in the local papers for what they were doing and the building they were evicted from is still lying empty now.

A lot of them, for their own reasons, have a pathalogical hatred of the Police which I really can't get into anymore. Since Maggie the Thatch has dissapeared I really cant take it all that seriously. I didn't feel justified in making myself a Police problem, even when most of my life was illegal. I wrote a fuller explanation of the views I hold about our uniformed brothers and sisters in London here

In Finsbury Park, I thought the way Police and Muslims treated each other over the two years said a lot about the British people which I hope I will be able to get across in my documentary.
This article contains Islington Borough Commander Barry Norman's views on the subject.

Another difference I have with my anarchist brothers and sisters is their choice of target. Last christmas they protested Band aid. They had their reasons but I thought

"Don't raise money for starving people! You evil people! We protest!" was the likely message which would come across.

I got hold of a pre-Mayday flyer and who do they want to protest? Jamie Oliver of course!

"Don't go on a mission to change the diet of school-children throughout this country! You evil person! We protest!"

I was incredulous. I looked on their website to find Jamie Oliver had been removed from the list. I am sure we can all imagine the conversations which went on behind the scenes there.
Posted by DAVE BONES at Friday, April 29, 2005

What utter twits. I've been saying it for a long time. Now I know for sure. If this is the "subversives", God help us all. It's enough to make you run screaming to find the nearest meeting of Conservative Future. Only to discover there's no difference, except for the Tories' marginally better sense of humour.

You are first up against the wall come the revolution!