Very boring day hearing from an Indian Policeman who arrested Hamid and Muktar Said Ibrahim, being called a "Cow worshiper" in the process. The chief defence guy (Joel) gave him a thorough questioning. Another stranger and much larger white female Police officer with blonde hair which was died a punky red underneath at the back, maybe to enable her true colours to be hid within a pony tail whilst on duty.

She, during investigations into 7/7 and 21/7 had taken a statement from Hamid about his knowledge of the 21/7 bombers. Of note (to the defence) within it he stated that he didn't believe either 9/11, 7/7 or 21/7 were the work of Islamic extremists and gave her copies of Illuminazi and a 9/11 conspiracy film.

We also heard from a very sweet "Community support" officer who had obviously spent a bit of her time on duty listening to Hamids rants about conspiracies.

"He was quite often depressed?" asked Joel (chief defence)

"Did you think of him as eccentric?"

Next we heard from an extremely nervous Cumbrian farmer. I mean seriously, this guy looked like he thought he was going to be dragged off and locked up himself at any moment. During some inordinately long and cruel gaps his eyes darted around the court room, probably in the same manner as one of his sheep when cornered.

"Did you have any contact whilst they were there?" asked the prosecution.

"Did you know why they stopped coming?"

"Did you ask them to stop coming?"

So much for newspaper tales of "My Taliban".

Mr Defence snidely suggested the farmer was running his campsite as a cash business on the side.

We then heard from two Cumbria Policemen, one of whom spoke of seeing three men doing forward rolls with sticks held like rifles, another who saw Asian looking dudes in military formation. He said that he himself was ex-military and had instructed on similar training courses.

One of the defence showed the second cop a video from covert surveillance showing the guys running down a hill and doing sit ups at the bottom.

"If your troop were training like this you'd send them all back up the hill with instructions to do it double time no?"

"Those I saw were much better trained than that."

From the start I thought we weren't going to hear what the witnesses had to say upstairs behind glass because the witness box microphone wasn't switched on. Being a bit too English I took my time asking one of the court staff to sort it, and when it eventually was sorted we had continual trouble with feedback.

Why are these able lawyers and court staff such ludites? Surely everyone knows that if you point a fucking microphone at a speaker you get feedback. I explained this a couple of times, it was relayed downstairs to the court usher who uselessly went over, tapped the microphone and left it in the same position.

After a long lunch I was able to frantically wave directions through the glass. I'd forgotten how tedious court cases are sometimes. I don't know how the jury stay awake.

I'm not sure about all this business about "Jihadi training". Everyone in Finsbury park believed Allah commanded them to train. They train together all the time. They all believed very strongly that some apocalyptic purge against Muslims was coming soon, and they had to be in shape to be able to defend their families. They believed it and it happened- to them. They are a self fulfilling prophesy.

Anyway on the way home I indulged one of my "other" obsessive compulsive habits. Anyone who's read my blog before might know that I collect newspaper advertisements with "double meanings". When I was more depressed and a lot crazier I used to rip out ones that offended me, ones which said RAPE!!! MUGGING!! EXCLUSIVE PICTURES!!! and suchlike.

I had to have this one: 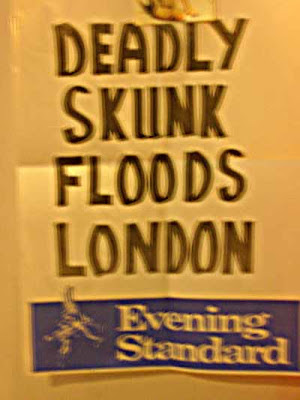 I instantly had an image of an evil cartoon skunk with a mad grin on his face turning on a huge tap.
Posted by DAVE BONES at Monday, October 15, 2007

you will see PHOTOS of WHO and WHERE Bin Laden and his NETWORKS ARE….

PLEASE FORWARD THIS INFORMATION TO THE FBI.