The Temporary School of Thought lives on for another two weeks in Mayfair!

Talking with a few of them they are shy of pubicity which is fair enough. Squat multi million pound properties and you are going to get this aren't you. I think "Posh squatting" is really good for stunt journalism and mainstream media infiltration as long as people enjoy it. When I used to do this sort of thing, at the start of this blog for instance I enjoyed riding the tail and blazing the trail of papers and TV with some good results but it did drive me quite nutty.

The journalists who made stuff about us wanted a positive story and were prepared to overlook negative things which could have been written about us- like the fact that we had moved most of the posse round the corner into an empty building on the site of one of the poshest schools in North London where TS Elliot and Sir Clive Sinclair had spent their youth. The school governers shit themselves, thinking we must have done it on purpose for some sort of "protest". They didn't think anyone could have been stupid enough to do such a thing by accident. We were. I have film of Brazilians happily tattooing each other in the basement, I will have to dig it out.

When the BBC and ITV London pieces about us went out on TV I was expecting a Sun headline the next day "Nice neighbour squatters squat school building in term time" but thankfully the School governers didn't want this sort of publicity. In court they were lined up looking very worried. We made no defence and apoligized profusely saying what a beautiful building it was. They waived the court costs we were liable for and I thanked them. Their posession order was immediate, we just about had enough time to break somewhere else and get everyone out.

When the caretaker turned up to secure the building he was laughing. I was mortified that some people had fucking scratched their names on oak doors. he didn't give a shit saying the building was having a 6 million pound refit anyway.

What is totally missing from The Temporary School of Thought is all the huge amount of internal madness, agro and drug consumtion connected to my experiences of this sort of thing. A lot of this is because these are all young students who wouldn't be homeless without the place like the bogus assylum seekers and crazies we lived with would have been. Missing also are all the moany, arsey old "activists" going on about "the Movement" and falling out with each other. I have never met such a positve bunch of squatters on a mission. 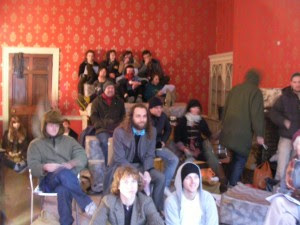 Here's a fairly positive article in The Evening Standard plus loads of links from Hexayurts Twitter page including audio from Vinnay Gupta's excellent talk about infrastructure I was blogging about the other day. Listen to this, it makes total sense! I just noticed I have appeared in the corner of a photo.

Personally I like all journalism about squatting and squatters, even bad stuff is just funny. Simply it is really good to document these things.