Went to the first day of Ecobuild in Earls Court. It is definitely worth going, tickets are free. Register online and pick up your ticket on the door.

I arrived about 10 to find a lot of people waiting for the place to open. Once inside I made straight past all the stands for the main “Arena” which turned out to be space for about 600? (I am crap with numbers) with the constant murmur of the surrounding exhibition in the background. This was quite nice actually. It felt like the “Theory connected to the practice” if you get my drift.

There was some pre-Boris debate with the Danish author of The Skeptical Environmentalist Bjorn Lomborg talking about painting all the tarmac in London white. He also spoke about claims that the sea would rise in the Maldives causing a “132% reduction in GDP.” I don't get this. GDP is Gross Domestic product no? Surely if 100% of GDP goes, then your country isn't producing anything. Where is the other32%? I didn't dare ask. I'm sure he would have some long winded answer.

I had jumped out of bed on autopilot and steered myself coffee-less to catch Boris and he was very entertaining. I stuck my hand up to ask a question from my scribbled notes but I don't think the chairman saw me. I wanted to ask him what he thought about squat parties and if he had ever been to one. 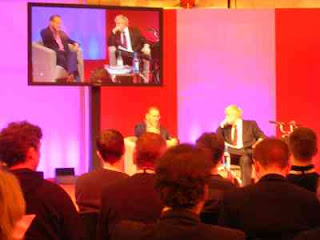 Boris was quite positive actually I thought. What can the Mayor of London seriously do? He was big into “Retrofitting” and wanted dugareed people of all ages to be involved in this.

Video of Boris at Ecobuild 2009 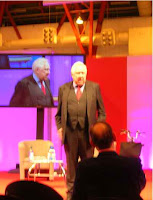 I hung around for Roy Hattersley who I actually got to question. He used to be my local MP in Sparkhill Birmingham in the early nineties. He was refreshingly Old Labour, a very strange guy to watch in real life after seeing him on TV and on Spitting Image in particular. He spoke a lot of sense. He said not-for profit landlords- co operatives, housing associations etc is a really good idea for social housing.

I was a bit daunted to start the crawl around the exhibition, but felt that after hearing the talkers I should have a look at the do-ers. It was all a bit bewildering to me. I was trying to look at all these strange devices, shapes, walls covered in ivy and sloping roofs covered in plants with an eye for how they might fit into my life. My head was swimming with shapes.

I don't get this suited people selling ivy and trays of succulents to other suited people. Surely if I want to grow ivy I can plant the bloody stuff, same as planting a grass roof. 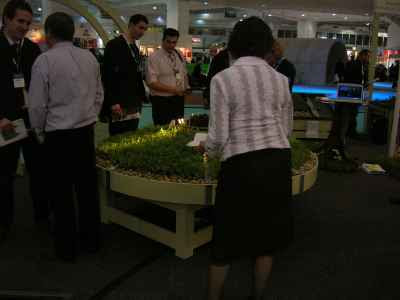 Talking about Coporate bolloxdom my personal low point had to be this. 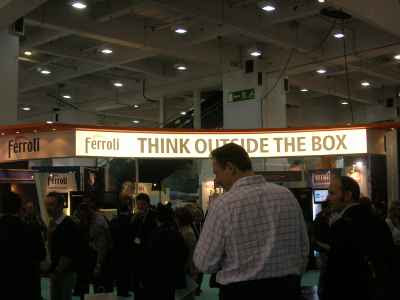 Who told Ferolli they needed a lit "Think outside the box"?

There was some dreamy college led stuff about Hurricaine proof "Woven Concrete" and some really nice experimental building. 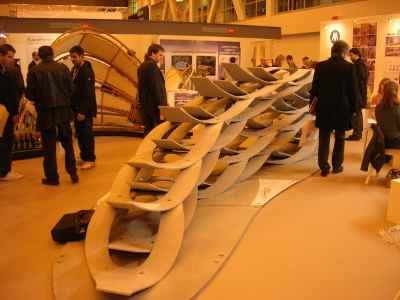 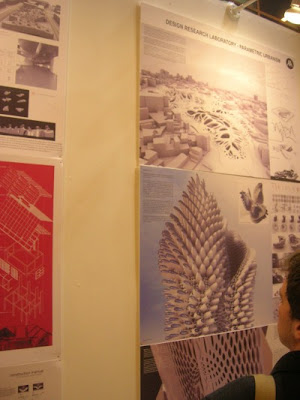 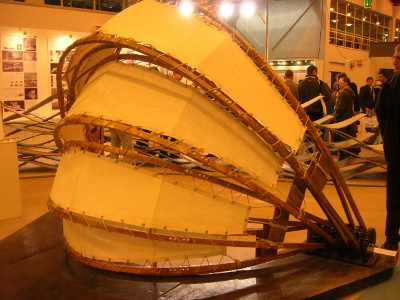 There was a stall advertising some beautiful natural pools, probably the sexiest thing in the exhibition. The most real thing to me was the Amazonails stand, these chicks just make beautiful houses out of straw.

I didn't know what I would make of Alistair Campbell, why he would be invited to, or what he would be speaking about at this sort of event.

When he took to the stand at 4 in the afternoon he spoke about what he knew best- campaigning and I am surprised to say I was impressed. He started on Obama's successful sloganeering, and pointed us to the fact that Al Gore was more influential out of office than he was in.

He was raving about a coming film, The Age of Stupid . He hadn't seen it, but was excited to have been invited to see it by the producer via Twitter. He thought that this would be a film that would have a huge influenece over everyone that saw it. He then went on to tell how he had interviewed Clinton during a series of TV interviews of famous people he undertook when he became an "Unemployed AntiChrist".

This turned into another anecdote about campaigning.

Know your objective,
Be clear about your strategy.
Work out your tactics.

He was applying all this to the object of "Greening the world". He defended Tony's record on all this which was quite sweet. He mentioned the film Milk (about gay rights politician Harvey Milk) again in relation to campaigning. He seemed to be preaching people power, consumer power. He said that in his time if you captured a front page in a couple of newspapers and the lead on the BBC news, you dictated the agenda. He didn't believe this was the case anymore, and thought that this was largely due to new media and he told all the politicians who still spoke to him about this at every opportunity.

There was a merger between political and consumer culture, people expected and drove standards through participatory media. We can all be campaigners and no one dominates the agenda as people consume media in different ways. They want to think for themselves. Information is infinity. 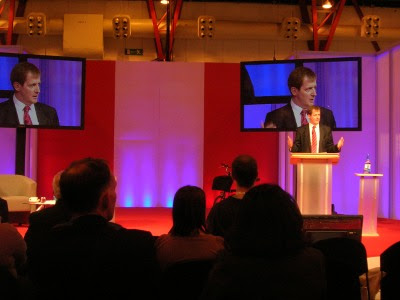 He said the fuel crisis was the worst thing to happen whilst he was in power. He was impressed that it was led by people power, a campaign by a relatively small number of people totally dominated the agenda in an era of 24 hour media. Groups could co ordinate as they watched themselves on TV.

During the questions the host (environmental journalist Roger Harrabin from the BBC) said that if Campbell was against people dominating the agenda he must have had a change of heart as this was exaclty what he used to do. Campbell didn't agree. I think he was thinking outside the box a bit there, but overall he was very good. Very inspiring to people who want to orchestrate change.

Video of Alistair Campbell at Ecobuild 2009

Where I live we are struggling with all this technology. We have wood chip burners, Solar Hot water, Cavity wall insulation, recycled glass worktops, all that. Some of it we are happy with, some not so happy but with nine people per house and occupants moving in and out all the time we are a really tough use environment. We have yet to reach our C60 targets. All of this is technology which consumer demand will push. Just get stuff which works.