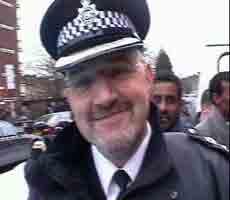 On Hamza’s first anniversary of moving the mosque to the street I filmed an exchange between a senior looking policeman who I had seen at Finsbury Park quite a bit and Hamza. There was to be a protest at Scotland Yard that afternoon. The Policeman was asking after the details of the protest. A little while later an even more senior looking Policeman quizzed him about the protest.

He asked if a lot of people would be at the protest, and if they would be traveling by tube. Hamza said he hoped so. He told Hamza that he would probably put a couple of officers on the tube to travel with the protestors to make sure they didn’t become a target of anything unsavoury. As the policeman came away from the exchange smiling I stopped him.

“ I’d just like to say that I think what’s been going on up here, especially with you guy’s has been fascinating.”

“ It is isn’t it?” he said looking back towards Hamza.

“ I just wanted to tell you that I’ve been involved in a lot of protests around London for years, but filming the reality of what you guys have been doing up here makes me feel a lot less like protesting and a lot more like documenting. Would you talk to me afterwards on camera?” 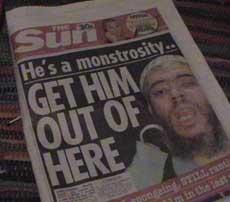 I had no idea how senior an officer I was talking to but I was surprised he had agreed so readily to an interview especially as this was the week The Sun were polling their readership to try and get rid of Hamza. I certainly had no idea that I was talking to the fucking Borough Police commander himself, Barry Norman.

I like Barry the Boss, if ever there is a takeover of London by the civilized majority I would vote for him as Dictator. Here is a transcript of my interview with him:

BONES: I’m very interested, how long have you been serving as a Policeman?

BONES: 25 years. And what is your rank here?

BONES: So you’re in charge of whats happening here?

BARRY: Errm.. Well I’m more than that I’m the Borough 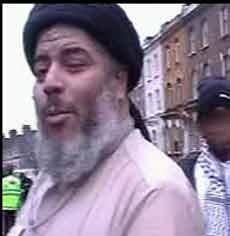 BONES: I’m just very interested how you feel as a Policeman and as a human being about what’s happening here and what your role is.

BARRY: Well our role is to facilitate peoples right to free speech. No part of my role is to have my own opinion about what people are saying. My opinion doesn’t count. What I am paid for is to make sure that there’s no breach of the peace.

BARRY: It’s very patchy isn’t it from time to time of course there is. In a cosmopolitan society like ours of course we get racism, but these demonstrations here, or these prayer meetings on a Friday have not caused us any problems at all.

BONES: None at all?

BONES: And there’s been no err… When your in the middle of err.. The Islamists and the Media, what can you do?

BARRY: Not get in the middle of them.

BONES: (laughing) Cos sometimes I’ve seen policemen err..try and get in between the media and the err.. Do you think it’s a Kangaroo court?

BARRY: But providing the media aren’t causing any aggravation, they can get on with they’re job and I’ll get on with mine.

BONES: I mean.. I’ve been involved with lots of different protests; I’ve traveled a lot with people who often have a very, very bad view of the Police. Yet I see here, err..British Police in British society, doing their job in a very, very interesting way, like. You know, it’s been fascinating.

BARRY: We don’t see our job as anything more than keeping the peace. We’re not pawns of the state. You know, we don’t have a mandate to express our point of view and we don’t wish to. All we want to do is keep the community safe.

BONES: Thank you very much.

As I moved away from him he turned round, was joined by his fellow officers and did a fantastic little jig on the spot. If my doc is ever made I hope you will get to see it. More police should dance like this. Why just a token gesture once a year at Notting Hill? More Policemen dancing that’s what I say.
Posted by DAVE BONES at Wednesday, June 02, 2004