Really quiet at Finsbury Park. Barry came down and spoke to everyone. A drop of sanity in an ocean of, well, calm for a change today.

“ These Zionist Jews, probably a very few people sitting round a table. They decide what is in the media.”

Mr. Abdullah was on his usual preaching vibe. A mixture of orthadox islam, Bush bashing and the internet.

He referred to www.biblebelievers.org
“ Evil rituals that Zionists do.” quoting the Talmud:

“Adam had sexual intercourse with all the animals in the garden of eden. This is in the Talmud people. The knowledge is there for you... but you want to...continue being enslaved by these people. Sanhedrin 55,3. A Jew may marry a 13 year old girl. Specifically 13 years and a day. Paedophiles!…Sanhedrin 45,3 A Jew may have sex with a child as young as 9 years old. Paedophiles! Perverts! Ruling our society and you blindly give them your allegance...Come on people get a life! These... Zionists entrap you and you give your alliegance to these, to imprison and kill my brothers and my children and to rape my sisters!”

Is this anti-Semitism? Hamza said specifically that he had many Jewish visitors to the mosque and that as Muslims they were the first to condemn the burning of synagogues. He said he didn’t like Zionists or freemasons. I don't know,look up bible believers or come to Finsbury Park to judge for yourself. I have no idea if a secret group of Zionist freemason sits round a table ruling the world. A female journalist from a Jewish newspaper carefully checked Mr.Abdullahs scriptural references with him afterwards. Anyway that’s the heaviness out of the way, and I know you all want to hear Hajj on dope...

A Canadian news team was about. A girl called Jane was interviewing. She had been in Afghanistan and said that she felt safer with the Taliban than the Northern Alliance, who were prone to raping and stealing. They interviewed Mr. Abdullah. When the interview was over everyone casually discussed Afghanistan, the difficulties of news reporting in Palestine and U.S. politics with the Muslims of Finsbury Park. Jamie had phoned me saying that Mr. Abdullah hadn’t got back to him and not to press them too hard. Mr. Abdullah was asking who Idealworld were and whether they worked for the BBC, and he was complaining again about the music I had used in my pitching piece about them.

“ Mr.Abdullah, all the T.V. about you guys say’s that you are specifically threatening the British people. Would you like something other than that to get out there? Patrick is the producer of a series on Channel 4 called The Other side. Can you imagine how many people come to him with ideas for documentaries? He can make documentaries about anything, yet he came here because of the cd I put together about you guys- music and all.”

“ Well you e-mail me a list of questions and we’ll go from there.”

“ I’ve written you e-mails before and you haven’t answered.” 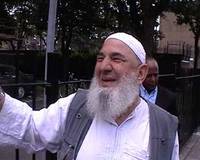 The conversations continued. There were maybe 6 police at Finsbury Park all during prayers and now they were long gone. I butted in on a conversation between Hajj, my favorite Finsbury park Muslim (see THE LONG HAUL) and the Canadian cameraman.

HAJJ: We are not allowed to kill innocents.

CANADIAN: (sorry didn’t get the name) Well yeah that’s the impression I got...

HAJJ: I used to smoke weed, I used to drink, I used to gamble, I used to take speed, black bombers, yellow tablets. There used to be bluey’s in the seventies. Blue tablets.

BONES: You were taking speed tablets? You?

HAJJ: Because I was looking for some kind of happiness.

BONES: You used to smoke dope?

HAJJ: Why I say that, the reason is now sometimes I get up in the morning to pray, I used to get up drunk. Do you think I am going to kill an innocent person and go to hellfire forever? The reason I told you...I used to enjoy these things. Still now I miss cannabis. Every night to look up to the sky, this and that. Living in a fantasy, but you get addicted to living in a fantasy.

HAJJ: My point is Allah commands us. You cannot harm innocents. Fight those who fight you. But in this country there is no way any Muslim is going to...(harm innocents)unless he is a nutter.

BONES: How long have you know Mr. Hamza?

HAJJ: A couple of years.

BONES: And you believe he is innocent?

HAJJ: Of course. Of course he is. No doubt about it.

HAJJ: If all the people smoked dope and packed up alchohol we would have a better country because people who smoke dope...they think sensible...it makes you think more but alchohol it makes you violent.

BONES: That’s fantastic Hajj. You’re the main man in my documentary! If Mr. Abdullah won’t do it I’m talking to you mate.

I don’t know who Abu Hamza is. If you judge a man by the company he keeps Mr. Abdullah and Hajj have been standing next to him the whole time I have been filming in Finsbury Park. I still hope to make this film so you can judge for yourself, and I can go sit on white sands beach, Koh Chang, Thailand before finding something more dangerous to do than fraternising with these extremists. War on terror? Well it sounds exciting.
Posted by DAVE BONES at Friday, June 11, 2004

HI DAVE - I JUST READ A LINK TO "BIBLE BELIEVERS". I AM A CHRISTIAN AND WAS A BIT BAFFLED AS TO HOW THE "SEVEN CHURCH'S" STORY CAME TO THE CONCLUSION TO WHICH IT HAS? IT SOUNDS LIKE A COMPLETE CONSPIRACY THEORY TO ME. I HAVE STUDIED THE BOOK OF REVELATION BEFORE AND EVERY PASSAGE IN THE BOOK REFERS TO SOMETHING FROM THE OLD TESTAMENT. THE NUMBER "SEVEN" IN THE BIBLE SYMBOLISES "COMPLETENESS" THAT'S WHY IN THE BOOK SEVEN CHURCH'S ARE MENTIONED, BECAUSE REVELATION IS A BOOK OF "HOPE" GIVEN TO THE "COMPLETE" CHURCH. THE NUMBER "SIX" IS ONE LESS THAN SEVEN AND IS THEREFORE "INCOMPLETE" HENCE 666 - AND IT'S CONNOTATIONS. THE NUMBER "SEVEN" IS ALSO FOUND IN THE NUMBER OF YEARS A HUMAN SHOULD LIVE "SEVENTY" YEARS IS THOUGHT TO BE THE AVERAGE LIFE SPAN OF A PERSON.

OH WELL I DON'T REALLY WANT TO GET INTO A LECTURE ABOUT THE WHOLE THING - I DON'T THINK THAT THE "BIBLE BELIEVERS" LINK IS CHRISTIAN - SOUNDS LIKE A CULT TO ME. THE TRUE CHRISTIAN MESSAGE IS:

JOHN 3 V 3:
Jesus answered, "I am telling you the truth: no one can see the Kingdom of God unless he is born again."
vs 16:
"For God loved the world so much that he gave his only Son, so that everyone who believes in him may not die but have eternal life."

ROMANS 5 V 6 - 11:
For when we were still helpless, Christ died for the wicked at the time that God chose. It is a difficult thing for someone to die for a righteous person. It might even be that someone might dare to die for a good person. But God has shown us how much he loves us - it was shile we were still sinners that Christ died for us! By his sacrificial death we are now put right with God; how much more, then, will we be saved by him from God's anger! We were God's enemies, but he made us his friends through the death of his Son. Now that we are God's friends, how much more will we be saved by Christ's life! But that is now all; we rejoice because of what God has done through our Lord Jesus Christ, who has now made us God's friends.

Anyway that's all I have to say. Those verses just hit me with a new meaning...

can you guess who this is?

i supposed to write "while" not "shile" and i think i was wrong by saying that all Christians get on because they don't. But we are all going to Heaven. Something to look forward to - I can't wait!!!

No idea who this is. Couldn't even guess. Write to my email address if you want. I've heard all the stuff about 6's and 7's but where is the significance of these numbers actually refered to in the bible? Sounds more astrological to me.

no really. No idea. Is it Tammy from DateToSave? If it is I'm too uncouth to go on dates and you live in the U.S. anyway.