Hajj to the rescue

OK I'm going to loose the chronology and relax a bit on all this...this is from tuesday 17th or possibly friday 13th. I am refering to my favourite Muslim, Hajj who I first wrote about here

The tapes were horrible to sit through. In the time I spent filming in Finsbury park, hating Jews as a race and encouraging people to bomb innocents in this country were always my cut off points at which I determined I would walk away from this project. Hamza never did either.

Week in, week out he told everyone who would listen that it was wrong to bomb innocents in Europe. I thought the media negligent not to be widely publicising this for our saftey regardless what they thought of him. Watching these tapes I thought that Hamza had come across as if he hated Jews and wanted blood spread everywhere. He was advocating slavery saying "They'll get used to it." I was dejected.

I called Hajj and asked if I could pop round. I like going round to Hajj's. We sit and watch TV together. He is great company. He says his is a "dawa" house and it feels "dawa" inside. 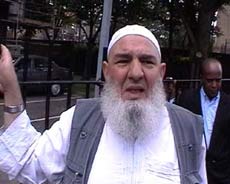 "They won't let the Muslims unite on this earth. They drew the maps themselves to keep people fighting."

I told Hajj some of the things Hamza had said. Each time he said "That is totally wrong!"

"No one is disputing the words Hajj..." I said.

I spoke of Hamza telling people to kill wine sellers.

"That is wrong! Hang on... was he saying about in a Muslim land or here?"

"What about in a Muslim land?"

"You can't do that, brother." he said with his hands out. "This is wrong in Islam."

I talked about Hamza comparing Jews to pigs and apes.

"That is in the Koran. God tested some Jews by sending a lot of fish on the Sabbath. They gave in to temptation and trapped the fish so he turned them into pigs and apes. "

He went on to tell me there was no Judaism in the old testament and that the Israelites were the Muslims brothers throughout history.

I told him that given what he had said in the tapes I thought British people were owed an explanation in the circumstances. He seemed to think that if Hamza had not made himself clear enough he would apologise, that was the type of guy he was.

I couldn't have ever imagined him apologizing. "He pleaded not guilty Hajj."

"But you have to, don't you? He isn't guilty, he is misunderstood." he said.

My mind phased a bit. Could a misunderstood preacher in a trial at the Old Bailey for incitement to racial hatred and incitement to murder carrying a maximum sentence of life just apologise???

I said although I believed they weren't racist they blurred the edges a bit too much so making trouble for themselves. I asked why he liked preachers who shouted, for instance..

"I like a preacher to shout! I don't want some honey mouth. I want someone to wake me up and make me aware of my sins! Abu Katada! Sheik Faisal! Abu Hamza!"

I burst out laughing and doubled up on his sofa.

I asked Hajj about the comment about "The tree's will say "Theres a Jew behind me! Kill him!"
why did Hamza say that?"

"They are the sayings of the prophet. Jesus is coming back to destroy the anti-christ. They are talking about a final battle between Zionists and Muslims. the Koran says Jews and Muslims will be fighting till judgement day. This is what we see. This is prophesy coming true."

He went on a bit about British society. "They say they want us to integrate. Integrate into what? The pub? Striptease? What is English? They don't like people being attracted into a pious life. How do they want to stop binge drinking? By opening the pubs 24 hours!"

"A bit. His hair is white. He's giving evidence on Thursday. You should come. He would be pleased to see you no?"

He seemed a bit confused, even by what he had seen Hamza reported as saying on TV.

"In my house. On that chair, a young Muslim says he feels frustrated about this country. The Sheik says "So go!"

He thought Hamza had quoted a lot from the Koran without specifying that was what he was doing as his audience knew the Koran. This is why they say "The Koran is on trial."

We talked about the diference between us in society, why Islam didn't attract me.

"Look Hajj, I like nightclubs where women don't wear very much and no one makes each other feel guilty about it. I don't see Islam as a better way to be going about things of this nature."

"The prophet says- Don't wear clothes as if they are a second skin." he answered.

He had watched a TV program in the seventies called QED with lots of naked men of all shapes and sizes. All the women were asked what was important. They all said a little butt first, second “What was round the front”. If women and men were kept innocent they wouldn't know the diference between people. Still, Mohammed is apparently quite realistic and accepts divorce. There is even a "Saying of the prophet" where he grants a divorce to a woman who told him her husband had a tiny dick.