Day trip to say 'happy birthday' to centenarian who made LSD
From Charles Bremner in Basle. 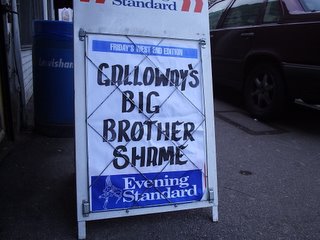 Galloway is actually winning me over a bit in Big Brother though I hate to admit it. His stated reasons for going into Big brother:- "All the other Politicians say how they would like to appeal to the Big Brother demograph, they talk the talk but don't walk the walk. I'm walking the walk."

That's fair enough in my book. It is very strange how Pete Burns looks at him as such a figure of stability. His character failings are very obvious, but they always were. Hes just George Galloway at the end of the day.
Posted by DAVE BONES at Saturday, January 14, 2006

Alright Bones, I'm here live and direct from the bible belt in Amerika. I have been fighting the good fight for the 21st Century with little success, but it appears that the 19th Century troops have gone to sleep for the night and I am bored. What I am doing now is bookmarking you site so I can exhaust my pent-up desire.

Anyway, I feel safe enough from warrantless intrusion, (you aren't Al Quaida are you? I don't have many civil liberties left!), to answer a few of your questions honestly. No slippers. 2000 feet. Midwest, (I know, I'm ashamed).

The question you haven't asked is: why Sparkle? Hell if I know. I banished her once for being hide-bound. Maybe it's the picture that brought me back. It's certainly not the audio. Sometimes, it's better not to know, if you know what I mean.

So there you have it, a voice crying in the wilderness from a nation in decline. When Bush stops us from leaving the U.S., the fiercest nation on the earth, in the name of keeping it safe, I'm going to need the name of a contact on the underground railroad.

We enjoy your blog. Many thanks for your comment at our humble site. http://london-bombs.blogspot.com/

cheers london bombs, what sort of co operative are you?

du Monde! when you gonna start bloggin? I had a special category just for you on my sidebar a while back.

2000 square foot? What are you a rancher? Do you brand your cattle?

I am just a humble commenter, road cyclist, climber and skier. No hat. No cattle. No blog.

how about his brother Ol' Maooda?
or his sister Belladona?

Yeah, thank God they haven't weeded out all the du mondes of this bleached , blanched and homogenized country. There's still a little color left to offer a shred of hope for the future.

du monde, you have a clear perspective and the makings of the kind of leadership to shepherd the lost and misguided sheep out the pointless forest. Step up.

Indigo, I am humbled by the accolade, but do not forget that half of us still see something other than black and white.

Now, Dog, here is where you come in for criticism. The right seems to see nothing but black and white and readily stereotypes. You embarrass yourself in public when you do. I mention parts of who I am and all you can do is call me "odd." I have climbed the Grand Teton twice, floated the Colorado (through the Grand Canyon) and the middle fork of the Salmon, hiked the Chilkoot Trail and recently rode with Lance Armstrong on the "Ride for the Roses." You claim to be a hiker and a skier yourself. Are you odd?

Right thats it I'm giving up following the hamza case and I'm off hiking in the states. Its raining. What the fuck am I doing here?

Bones, come over to the United States of Canada and we'll form an expedition to invade the Confederacy. Unfortunately, at the moment, they control most of the natural wonders, (grazing and mineral rights you know). I know how you feel about firearms, but you'd better bring an enfield. These rednecks are heavily armed.

But it feels a bit stupid when there is obviuosly a discussion taking place. I will just say a simple "yes, me too" and leave it at that.

Sorry babes. Don't mind us. Me too what babes? LSD or Galloway?