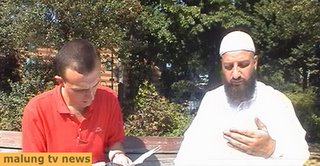 I've never knowingly had a Muslim commenter on this blog and the "subjects" of these little movies have never told me what they think of them.

In Finsbury park, when I was filming I didn't tend to talk too much. I actually got round to asking Abu Hamza if he had watched any of the rough edits I was distributing amongst his friends. He said he had and he thought they were "interesting". The next week he was arrested, so Hajj told me, by Police with machine guns at 2 AM.

7/7 happened in the first week of his trial. A very disturbing time for me and Mr. Abdullah.

I caught up with him days later. He is very difficult to edit, being a preacher its very hard to interupt or guide the conversation. In this film I've focused on his comments about 7-7, though we spoke about a lot more which I will try and include in a future edit. The Albanian journalist in Preachers of Hate and I filmed this interview hours before the images of the 7/7 guys in Luton were released on the TV news.

Please do report any technical difficulties. All comments, accusations of terrorist collusion or "propaganda" making are welcome as usual.

The film starts with a scene from Hyde park corner the first weekend after 7/7.
Posted by DAVE BONES at Saturday, December 31, 2005

That was interesting. well edited too.

I nearly pissed myself at the AM-EN//SA-TAN bit. Fantastic.

God those technicolour britches were vile.

Did u read about the 'hate crime' committed by the Gay and Lesbian Humanist Association? What a load of bollocks, when are you people going to discover free speech? What kind of stupid shit-eating GAYS are defending MUSLIMS who want to live under Sharia law? Where do they think they'll be then? The birthrate demographics mean we'll find out sooner rather than later.

These queens remind me of that wanker George Bernard Shaw, too busy calling for England's unilateral disarmament to worry about Hitler. When asked what he would do when the Nazis landed, he quipped, "Welcome them as tourists!" Not sure if history has recorded any witty apercus he uttered upon hearing of Auschwitz...

PS Someone in Leeds CLAIMING to be Jodie Marsh left a message on my Jodie Marsh post, directing us to her website. I'm skeptical

Cheeze for the encouragement Boo! and happy new year!

OK Jeff (and happy new year)Its very hard to say "most muslims" with any authority isn't it.

60% of Muslims want to live under Sharia law. Suprises me a bit. I would have thought it would be 100% as its a fairly central tenet to Islam no?

Well until they start and I'm proved wrong I think thats bullshit. How many innocent Muslims dead in Iraq?

Shock and Awe= Fundamentalism and Extremism.

I trotted up to those who were actually being accused by your government and mine of terrorism just to make sure and they STILL don't believe it is Islamic to attack innocents.

They believe homosexuals should be put to death cos it says so in leviticus 12 vs 20. I'd call that homophobic.

They don't believe in gay bashing though, or practise it either.

Dont know what to say mate. I've only been talking to one very small group.

You call your blog "beautiful atrocities", doesn't that make you an extremist and a fundamentalist?

Whats the story behind that?

equating leviticus to islam is a FALSE MORAL EQUIVALENCY. No homos are killed in the name of Jehovah, while vast swaths of the world & squillions of people live in islamic sumps, er, societies, devoted to 7th century justice.

as for terror, i meant a verrrrrrrrrrrrrrrry large % of muslims - the mythical moderate muslims - are quite demure & discreet in their opposition to terror (like all those british mooslims who were so sympathetic with the 7/7 bombers), which is why i tend not to believe they exist.

when confronted with monstrosities like Nazism & the jihadis, 'hate' is an appropriate response, & should be encouraged

fyi beautiful atrocities is the title of a story i wrote about michael jackson, & refers to surgically mutilated celebrities

"equating leviticus to islam is a FALSE MORAL EQUIVALENCY"

Why? They believe the bible apparently.

dave. it's a false moral equivalency because it suggests EQUIVALENCY. Are there Christian or Jewish societies where more than .001 % of the population is living in the 7th Century? No. Are there ANY Muslim societies that aren't? Debatable. I'd bet a majority of British mooslims agree with Abu about the blood sacrifice. (recipe here, btw) You seem rather cavalier about Muslims in Britain wanting to live under Sharia, like it's just another quirky pov. It means a substantial & growing population REJECTS everything you value about a liberal society. I'd be worried, & if I was in Europe, I'd be getting the Hell out. (See Steyn: It's the Demography, Stupid. The numbers don't lie)

Another false equivalency beloved of the Left is the 'cycle of violence' in Israel, implying an equivalency between Islamonutter terrorism & IDF response. The former slaughters civilians as a matter of policy, the latter risks its own soldiers lives to avoid civilian casualties.

Sorry I don't understand the "blood sacrifice" bit. Were you refering to a section of the movie?

Yes if Hamza and co were in the majority here I would be worried for my own lifestyle and the lifestyle of my friends who are gay.

That is part of the reason why I talk to them NOW. I don't want them to feel isloated. The blatant hypocrisy of the west is MORE likely to create trouble.

Like the guy in the movie says, at this time

The rhetoric you and sparkle and co use disturbs me. You are all talking up a war. If you carry on putting out this sort of energy it will come to you and you wont like it.

PS your view about Israel/Palestine is warped too.

A few years ago there was almost peace. A hope of normality. One president assasinated, one visit of one rightwing terrorist to a sensitive area and the clock went right back. Thats when suicide bombing started.

When those on the Palestinian side lost all hope for a peaceful settlement.

I'm not saying its right. Its just true.

another PS- (you can tell I've been thinking about this)

Cheers for quoting Mr. Steyn. Now he seems like a fundamentalist.

If he is right, shouldn't there be a government department doing what I am doing? If the balance tips toward Islam in Europe doesn't that just mean we will stop attacking Muslim countries and standing by while others kill Muslims?

Which makes "the West" the radical fundamentalists again INNIT?

"They figure there's an excellent chance they can drag things out until Western civilization collapses in on itself and Islam inherits by default."

Islamic law in Islamic countries, rather than despots proped up by "infidel" money. I can understand that. It was a popular movement in Egypt in 1950, put down by despots with western money and EXTREME VIOLENCE.

"Multiculturalism... It's fundamentally a fraud."

"the West is awash in an epidemic of self-hate crimes"

I can see his point, which is again why I am doing what I am doing, confronting all of this head on and not hiding what people are REALLY SAYING.

"They want it (the world) and they've calculated that our entire civilization lacks the will to see them off."

Yes. They believe Islam will inherit the world. According to Steyns figures, yup. I think hes right.

So whats your answer? Kill all Muslims?