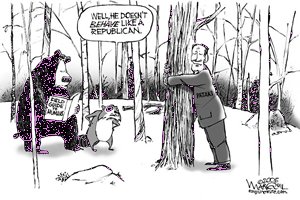 Honestly, hug a tree. Stick your hands in wet earth. Get into the turning of this planet.

Like Israel, the U.S. government was amazed and furious with Russian President Vladamir Putin's invitation to Hamas. A U.S. official asked how Russia would respond to a U.S. invitation for Chechen rebels to visit Washington.

Liberals in the UK loose their leader when the badly kept secret of his alchoholism is revealed, loose a couple of leadership candidates through gay sex scandals and then go on to WIN a byelection, turning over a Labour majority in Scotland with a 16% swing...

everyone on TV is saying that it is all because of a bridge...
Posted by DAVE BONES at Friday, February 10, 2006

Analysis: Why is Putin Reaching Out to Supporters of Chechen Separatists?