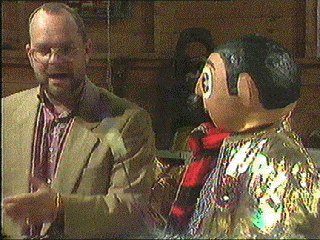 James Whale (on the left in the pic) is a UK "shock jock" who used to have a late night Leeds based zany TV show in the late 80s which was quite watchable to us students. He was always full of life and very rude to people who phoned in. I never knew he had Hamza on the show.

James Whale defends having Hamza on his show, commenting: "Getting these people around a table and talking may help us all to understand the problems facing us all. My programme doesn't shy away from the controversial issues. In fact, if Osama Bin Laden called me tomorrow, I'd ask him what time he could come on..."

Sounds like my sort of guy. I can't find the show anywhere online but I'm finding cryptic messages refering to it:

DID ANYONE HEAR JAMES WHALE THIS AFTERNOON STICKING UP FOR HIM......I WAS FUMING!!!

Intriguing. I'm going to try and contact him.
Posted by DAVE BONES at Saturday, February 11, 2006

"My programme doesn't shy away from the controversial issues."

Tell him to put that to the test. I hear there are some controversial Danish cartoons floating around...

hes probably all over it.